In order to minimise their volume, some fluids (e.g. ammonia, LPG, LNG) are stored as liquids at low temperature. When removing these fluids from storage it is often required to convert them into a gaseous state. This requires the use of a heat exchanger in order to supply the necessary latent heat of vapourisation.

For a number of reasons, the design of such heat exchangers is problematic. There are a range of issues which, if not correctly addressed, will cause the heat exchanger to perform below expectations. These issues can be explored with reference to a typical example, in this case, an ethane vaporiser.

The process conditions specified in the diagram give rise to three characteristics which are typical of this type of duty and which need to be carefully considered in the design of the heat exchanger:

• The specification requires that the ethane is completely vapourised and superheated

The first problem on the list is that freezing of the steam condensate may occur, leading to localised blockage and potential for mechanical damage. This is most likely to occur if the steam flows in a narrow channel such as the inside of a heat exchanger tube. For this reason, the designer usually elects to place the steam on the outside of the tube bundle, so that hot steam is able to flow to all areas of the surface and prevent freezing.

Other solutions to the freezing problem are: steam on the tubeside but using bayonet tubes; using a different heating medium such as a glycol/water mixture.

The third problem is that converting a liquid into a dry, superheated vapour is difficult, even if film boiling is avoided. As the boiling process progresses there is a reducing amount of ethane in the liquid phase and an increasing amount present as vapour. This means that the film of liquid on the heat transfer surface gets progressively thinner, while the velocity of the vapour flowing over the film get progressively higher. Before the liquid can be completely vapourised, the high velocity vapour shears it off the surface and entrains it. This results in “mist” flow, with very small droplets of liquid being carried along in the vapour phase.

The problem with mist flow is that it is very difficult to convert the remaining liquid droplets into vapour. There are two reasons for this. Firstly, the small diameter of the droplets leads to high surface tension forces on their surface, making it difficult for molecules to pass from the liquid to the vapour phase. Secondly, the heat transfer process supplying the necessary latent heat is slow. The heat transfer surface has dried out and, because the droplets are travelling at the same speed as the vapour, the heat transfer between vapour and droplet is by natural convection only.

The practical outcome of mist flow is that the stream leaving the vapouriser may be a mixture of superheated vapour and unvapourised liquid. This liquid will be carried out of the vapouriser into downstream equipment, where it may cause damage (in a compressor for example). In order to achieve a dry vapour, the throughput of the process will often need to be severely restricted.

The problems described above lead to a number of approaches to the design of vapourisers. Three typical heat exchanger types are illustrated, each of which attempts to solve some or all of the issues identified above.

The first type illustrated is the bayonet tube heat exchanger. 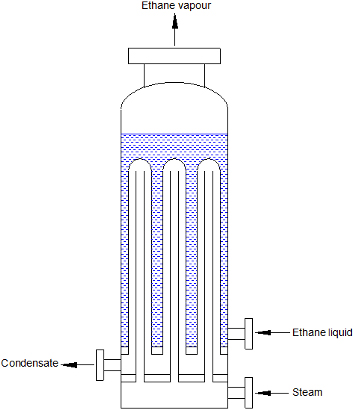 The steam enters along the inner tube and then flows into the outer tube where it condenses, supplying heat for the vapourisation of the ethane in the shell. This means that hot steam is present along the whole length of the tube, preventing freezing of the condensate. This type of unit does not, however, solve the problem of large temperature driving force, so that film boiling is still possible. Also, the arrangement of the shellside is such that superheating of the vapour is difficult to achieve and liquid carryover is probable. Separate equipment is typically required to superheat the vapour and separate any remaining liquid.

By careful selection of the intermediate fluid and its pressure, it is possible to avoid condensate freezing and reduce the temperature driving force acting on the ethane boiling process. However, the reduction in temperature driving force may not be sufficient to completely eliminate film boiling, and the problem of mist flow remains. The equipment is also relatively large and complex, leading to higher cost.

The third possibility is to use a conventional shell and tube heat exchanger with the steam on the shellside (to prevent condensate freezing). If the sizing of the heat exchanger is based on a reduced heat transfer coefficient to take account of film boiling, the only remaining issue is that of mist flow. This is solved by placing inserts into the tubes; inserts modify the flow pattern such that the entrained droplets are effectively vapourised before the ethane leaves the heat exchanger. Two inserts types have been proved effective in this role: twisted tapes and wire-matrix inserts. The former works by imparting a spin to the flow which forces the droplets to impact on the heat transfer surface. The latter intercepts the droplets on the wire matrix, creating a relative velocity between droplet and vapour which rapidly vapourises the liquid.

The advantage of the tube insert solution is that all the issues affecting vapourisers are effectively addressed within a compact and simple heat exchanger. Tube inserts have been applied to the problem of total vapourisation in many applications, especially where liquid carryover has led to throughput restrictions. In many cases, the inserts have been retrofitted to increase the duty of a poorly-performing vaporiser.