Air cooled heat exchangers provide cooling by passing ambient air over a tube bundle. As the air passes over the bundle it is heated and so the air leaving the heat exchanger is at a higher temperature than ambient. If the hot exit air is allowed to recirculate around the cooler it will raise the effective air inlet temperature and therefore reduce the cooling capacity of the heat exchanger.

Hot air recirculation is a potential cause of performance problems, and must, therefore, be addressed in the plant design. Attention must be paid to the design of individual heat exchangers and to the overall layout of the plant if both types of recirculation are to be successfully avoided.

Why Does Hot Air Recirculation Happen? 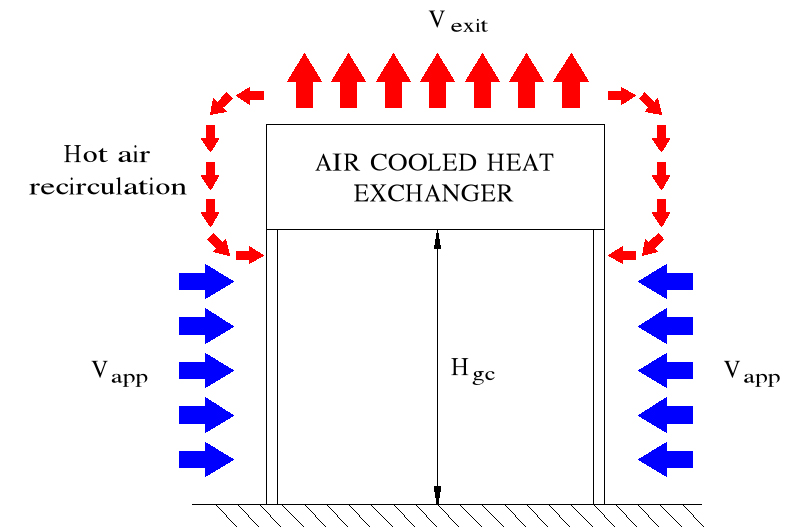 When air is moving, its pressure is a function of its velocity (the Bernoulli principle). The higher the velocity, the lower the pressure. A pressure difference which allows hot air recirculation is therefore created when the velocity of air approaching the sides of the cooler (Vapp) is somewhat higher than the velocity of the air leaving the top of the cooler (Vexit). This gives rise to the most basic rule for avoiding hot air recirculation, which is that the air approach velocity should be less than the air exit velocity. 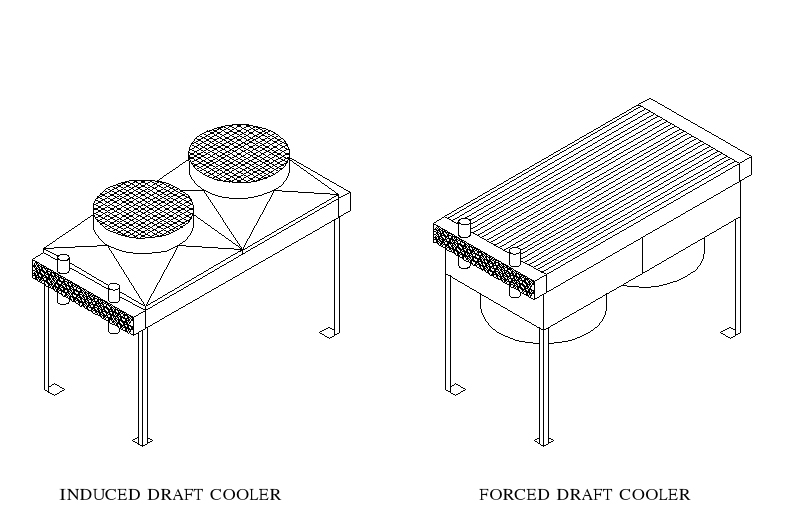 Wind increases the risk of hot air recirculation in a number of ways. Firstly, the plume of hot air rising from the air cooler exit is pushed sideways. This makes recirculation on the downwind side of the source cooler more likely, and also gives the hot air the potential to travel to another air cooled heat exchanger. Secondly, the wind will create a low pressure area on the downwind side of the source heat exchanger which will encourage air movement in the downward direction (see Figure 3). 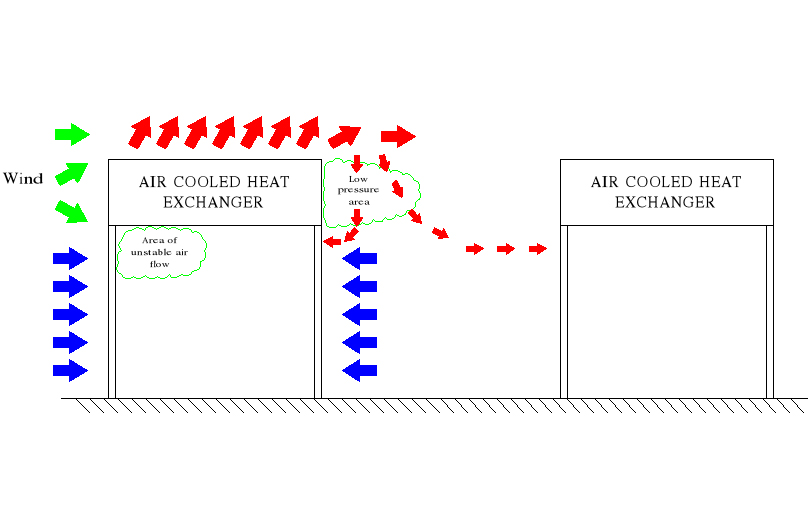 Cross winds can have other damaging effects on air cooled exchangers. For example, the fans on the upwind side of the cooler can be affected by unstable airflows caused by the wind interacting with the cooler structure (see Figure 3).

Some air coolers are more likely than others to suffer performance problems as a result of hot air recirculation. Factors which are likely to make a cooler particularly vulnerable to impaired performance are:

An example of a restricted approach area is where a cooler is positioned in the middle of a large bank of air coolers (see Figure 4). Compared to a stand-alone cooler, such an arrangement significantly reduces the air approach area and therefore leads to relatively high approach velocities. 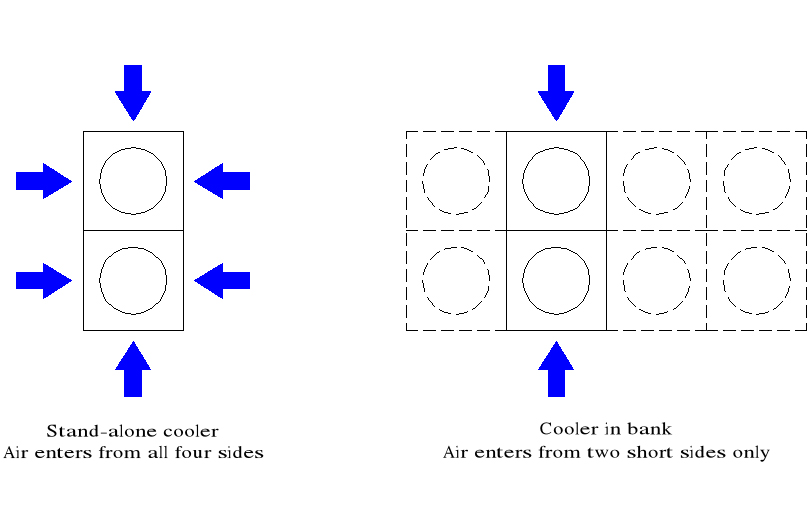 Where the above factors are present, the designer must take action to ensure that the performance of the heat exchanger is adequate under these challenging conditions. Other than switching to an induced draft arrangement, the simplest action to take is to increase the ground clearance (Hgc in Figure 1) to achieve the required approach velocity (taking account of any restrictions in approach area).

One difficulty with this approach is that, for large installations, the ground clearance required may be quite large. This then exposes the cooler to greater wind velocities (since wind velocity tends to increase with elevation) and therefore to more significant wind effects.

In such cases, mesh screens can be combined with increased ground clearance to protect large forced draft air coolers from the undesirable effects of cross winds. Such screens are mounted on the sides of the air cooler structure and provide stable air conditions in the fan entrance area (see Figure 5). The screens also ensure a greater physical separation between the exit and approach air streams, such that the risk of recirculation is reduced. 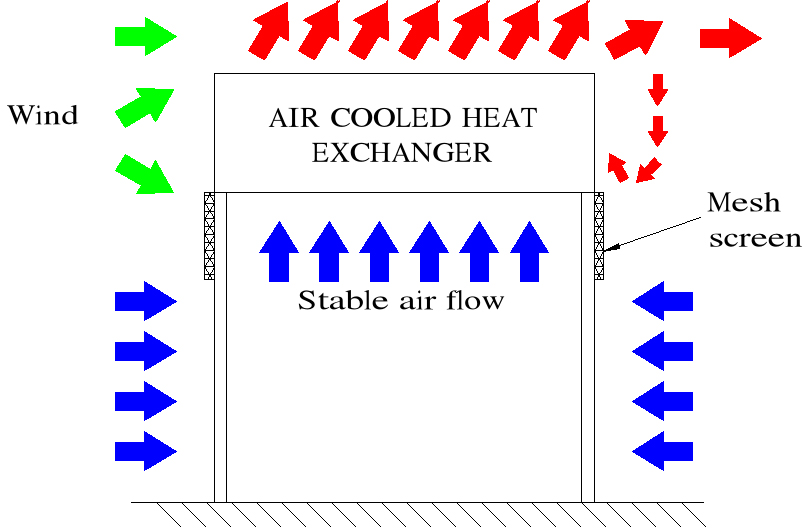 Where justified, motorised screens can be combined with a weather monitoring station to provide automatic optimisation of screen position with wind strength and direction. On hot, calm days the screens can be completely retracted to maximise air flow to the cooler.

As shown in Figure 3, hot air can travel from the exit of one cooler to the inlet of another. It is therefore important that the overall plant layout minimises the risk of such hot air migration to vulnerable coolers. This requires consideration of the orientation of coolers to the prevailing summer wind direction, relative cooler positions and elevations, mixing of forced and induced draft coolers and the influence of local topology. The presence of other sources of hot air (e.g. engine exhausts) should also be considered.